Up earlier this morning and had our breakfast, cleaned up and hit the road. Had a few stops along the way to Haast, did some water falls, but not a lot of water flowing at the moment, we have noticed all the lake levels are low, the locals are saying the it’s been real poor with snow levels and even though they get a lot of rain, the amount of snow melts really does help the dam levels. We have clear skies, stopped at Lake Hawea and had lunch down at the lake, it really is a magic spot. Saw Rocky Range and called into Butchers Dam and Lake Dunstan has lovely reflections it’s on the way to Cromwell, in the Roxborough area. Stayed at Miller’s flat camp ground, $14 each, nice clean spot, bit run down, the owners are lovely.

Lake Dunstan and it’s lovely reflections. Smoke from fire in the background adds to the moodiness of the scene. 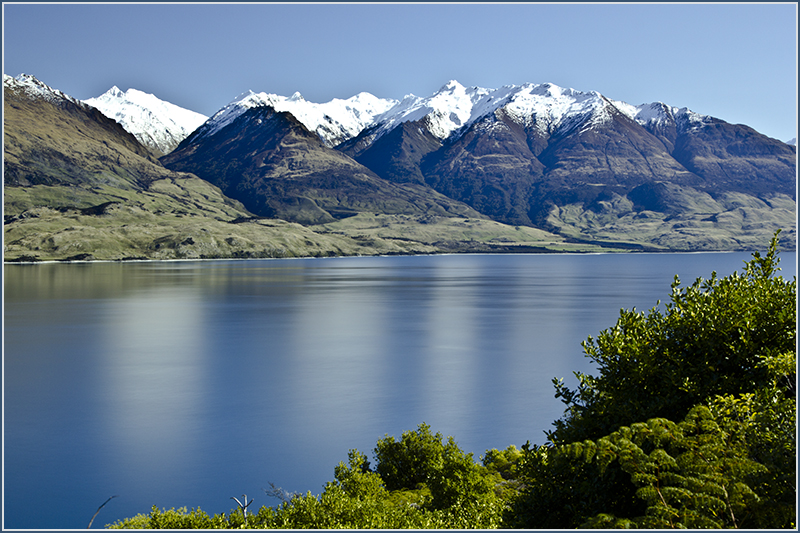 This is the view as we headed over the Haast Pass and heading towards Wanaka.

Woke to a frost, even the water out of the hose in the tap is hanging out by about 10 inch and is frozen. 8.14 am and ready to hit the road, did all the dumps and refills once we broke the ice up. Called into Gore, town of the country music, NZ’s Tamworth. They also boast trout. We had a good run down to Invercargill, called into see my Dads grave at Lumsden. Didn’t stop in Invercargill carried on down to the Bluff, I really liked it there, very windy and very cold, coming straight up from the Antarctic. It had very low clouds but could still see Stewart Island. Was very hard taking photo’s at the look out due to the wind, nearly blows you over. Saw interesting things, like chocks in paddocks with sheep and or cows all happy together. Had a feed of fish & Chips and it them down at the wharf. Left the bluff about 1 pm and started for the Catlins. To get to Curio Bay we made a wrong turn and ended up 28 km out of our way but got to see some nice country side along the way, when we got to the causeway and saw the sign to go over to the Tiwai smelting then I realised we had come the wrong way. No worries, turned around and got back on track and got to Curio camp grounds at about 4.30 pm. Took photo’s on our way in and what a great place. Got the camera’s and went straight down to the Penguins, we have been told that they head back up out of the water into their nesting place at about 4.30 pm onward until dark so will sit it out. Of course the sun has gone behind of the hills so the bay is in shadow and quiet dark due to the cloudy weather,  but we saw 10 Penguins, love there calls, but I was amazed at how slow they came up the beach and over the rock, I assumed they would leave the water and rush up to their hide away, but they took nearly 1 1/2 hours, by this time it was really to dark to get decent shots,  now a few spits of rain so headed back to the camper, will be down here 1st shooting light and wait, bbbrrrrrrrrrrr it will be cold. 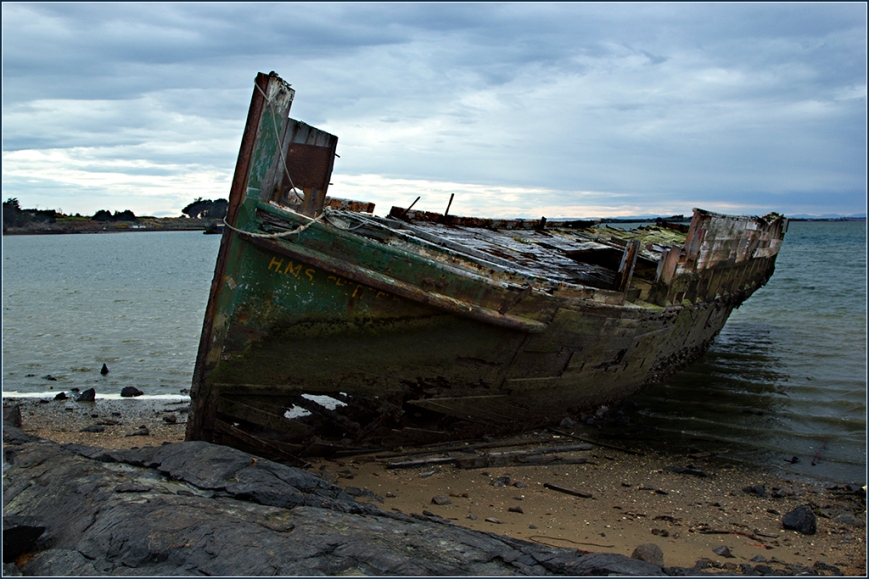 Came across this boat HMS was all we could read, certainly seen better days. This is not far from an old boat house at the Bluff.

All the photographs on this site are protected by copyright © Judy Hendren. All rights reserved.
%d bloggers like this: